The Gift of Synchrony 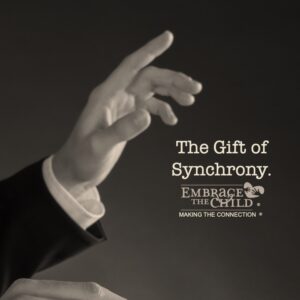 As I reflect on my sessions in coaching, while music swirled around us, I provided  a small rhythmic tap downward, gently pointing with my index fingers inward, gesturing to move a parent and a child closer together, eliciting engagement with smiles, a spark, and rhythms unfolded in play together. Synchrony and rhythms in relationships or human musicality needn’t only be guided with words.

The movement and the experience felt very familiar and brought me back to my college years. Somehow in some ways, I believe in my case, coaching is linked to with music. I think back to my days in Heinz Chapel Choir (HCC) when the connection between each member with our director, the beloved late John Goldsmith, was so strong. A tap of his finger or an intentional pause was enough to unify the entire choir in milliseconds. Coaching is that way. Let me explain.

In HCC, we began years ago with forming relationships. However, in the late eighties our only connection to attend our practice was a type-written schedule with a room number and location. We arrived, some dressed to the nines, other disheveled from long days of classes, and we joined to produce beautiful a capella chords. Unsure and uncertain with a new director, we began. You see that first year, there was a change in directors so we were all, freshman to seniors, meeting Mr. Goldsmith for the very first time.

Much like therapy. We meet and greet and come to find an understanding of one another over time. Certainly, that first finger tap was not as well read at the very start. We, the sopranos, even required extra practices for the measures of swift moving 16th notes in Sweet Suffolk Owl, but at the final concert, we were led by subtle nuances of gestures into breathtaking waves of melody and harmony. Unified.

As time went on, I recall, he’d simply stand back and smile, give a head nod in the middle aisle of Heinz Chapel. And, that was enough. The heavenly voices rang amidst the colorful stained glass window in thrones of exquisite harmony.

Coaching is like that. Often families are anxious and uncertain at the start, each diverse. They are not sure what to expect or do not see the full picture in what looks like play to the onlooker. Initially, we move in more direct ways as I offer suggestions for raising or changing a vocal tone here or there, moving positions to be better in view of one another, following a child’s intentions to make meaning together in play with specifics in how to join, but over time as we begin to know one another, we move in syncrhony—Quick glances, breaths and slight gestures may not have great meaning at the start, but as we move on make all the world of difference in making the connection between parent and child, growing together in an undisrupted form…and I might say as well, the connection between parent and clinician unfolds. We are akin to that of director and musicians. Somewhere along the line, standing back and just watching is enough.

Coaching is not a home program or structured regime (don’t let anyone tell you that is what it is) or a scientific formula. I find that over the years coaching is much more of an art rather than a science. I could provide an entire array of scientifically rigorous studies to validate synchrony (Leclere et al., 2014) our hoped for gift of coaching. We must value that coaching is a process to reach an embodied experience, leading parents to enfold into the flow, if you will. I’ve been told, as with music, that it has the feeling of becoming “magical.” Yet we know the grit and the effort put into our relationships and time together, so that the evolution has moments of magic, but the effects of coaching, like making music, are real, lifelong and life changing.

Thank you for this gift, Mr. Goldsmith. As a musician, your legacy of lessons learned through a tap of a finger lives on across professions as “we have made music.” As an occupational therapist, these experiences, first acquired through you, benefit the children and families in my practice. Our therapeutic music, influenced under your direction, transcends as the epitome of coaching into my work, every day.

The late Mr. John Goldsmith, lovingly known as “JG” to his most recent cohorts of students, began at Pitt in 1989 as the director of Heinz Chapel Choir. As part of his first cohort at Pitt, our group always felt special, although he had a way of making all feel this way. Before his passing, at the yearly Christmas Concerts, he always welcomed me with a bright smile, an exuberant “Stacy!” and an embrace. His talents were many, and his heart filled with gold. Thank you Mr. Goldsmith. In true Heinz Chapel tradition, “We have made music.”

Heinz Chapel Choir, an acapella entity, has a strong 80 yearlong history and tradition. Heinz Chapel Choir is not known for music majors, but is diverse group of students and holds a legacy as an endearing group to each member. John Goldsmith expanded its reach as an international touring group.

To find out more about Heinz Chapel Choir’s rich history.